Since my designs were sent off this morning to the Phat Fiber headquarters I thought I’d share with you everything I’m sending in this month for the Phat Fiber sampler box. The box is a great way to try out indie designers and dyers. This month’s theme is “geekery,” which really speaks to me, and that meant that I had far too many ideas! So since I couldn’t decide, instead of one design, I’ve included what seems like a billionty designs.  But they are all framed around one specific geek love of mine – Doctor Who. The first four designs pictured are part of my companion series and the next four are part of my regular Doctor Who series. And yes, everything’s up in the Exchanging Fire shop!

The Only Water in the Forest is the River

Don’t forget, if you purchase anything in my store from February 15 – March 15 you are eligible for the Phat Fiber Superbox Giveaway! To win this month’s Phat Incentive, which includes the contents of the February Video (aka The Superbox) AND A $150 Gift Certificate to one of the participating shops, you need to join the Phat Fiber group on Ravelry and the post what you’ve purchased in the incentive thread.

Here I am in featured right at the beginning of the Phat Fiber video for this month:

I’m so excited to reveal to of you the new stitch marker designs I’ve been working on at Exchanging Fire since season seven of Doctor Who ended this summer. I’ve been preparing for the 50th anniversary and Christmas specials, of course. And what better way to enjoy them then knitting along with your very own DW-themed stitch markers? Most of the modern companions are included, as well as some of my favorite quotes and concepts from the show. I hope you enjoy!

Sometimes a love note isn’t written in words. Sometimes there are no words needed. When I design a set of stitch markers inspired by a favorite poem or song or even a TV show, I feel like these small, practical bits of jewelry for your needles are my love letters to the things I enjoy.

When I saw these rectangular blue beads with their very geometric mod style I immediately thought of the Tardis – “brand new and ancient and the bluest blue ever.” I knew they had to be turned into Doctor Who stitch markers. In some ways, Doctor Who is one long love story of the art of science fiction. These stitch markers are my love notes back.

Mad Man with a Box

“A daft old man who stole a magic box and ran away.  Did I ever tell you that I stole it? Well, I borrowed it.  I always meant to take it back.  Oh, that box, Amy, you’ll dream about that box.  It’ll never leave you.  Big and little at the same time. Brand-new and ancient and the bluest blue ever.”

These markers join the rest of my Doctor Who series, which currently contain:

“Rescue me chinboy and show me the stars.” 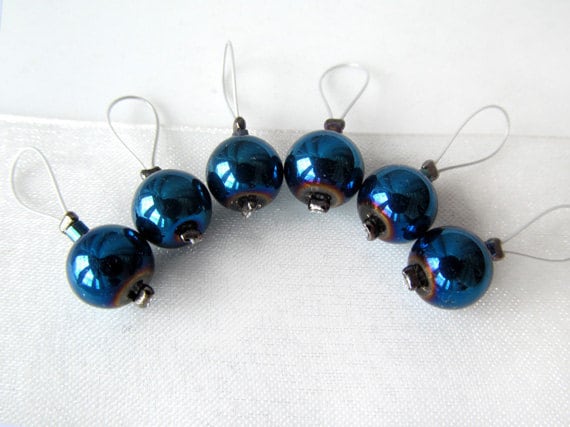